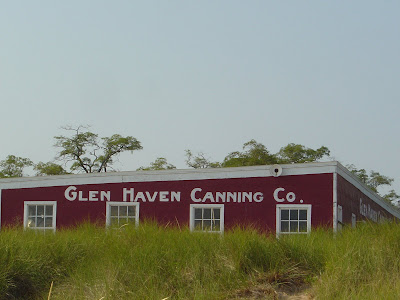 Ever hear of anyone over the age of maybe ten who was so antsy to open her birthday presents that she got up at the crack of dawn to do so? This is what Fellow Traveler did. Of course, we did go to bed early the evening before -- on the spur of the moment we'd decided to spend the night in Cadillac, a halfway point to our trip, so after some mad scrambling to pack and round up the dogs, and an hour's drive from Outer Podunk, we were pretty beat; more or less comatose before 10:00 at night. Anyway, we found ourselves up and at 'em at 5:00 am Friday, and FT immediately commenced opening her birthday gifts. You know, it's not every woman who's impressed by a harmonica (it's a long story), a Pudge Rodriguez bobblehead and a stainless steel back scratcher; but FT was. She even test-drove the harmonica, there in our room at, like, 5:20 am; between that and Cassie the golden retriever going into Hound of the Baskervilles mode after being startled by another guest in the hallway I kept waiting for the staff to usher us out of the place, with instructions never to return. But they didn't; and we left of our own accord just before 7:00.

A poignant start to the morning: We stopped at McDonald's to get the dogs sausage biscuits and some coffee for ourselves, then headed for a local park for dog breakfast. As we pulled into the parking area we were startled to see the shambling outline of a human figure emerge from a darkened woodland pathway and head toward us. After a few moments we realized that it was a homeless person who'd obviously spent the night in the woods. As he approached he stopped in the park's picnic area to rummage through the trash cans -- for bottles and, we thought, maybe for some salvageable picnic throwaways as well. He was an older man -- in his 60's, at least. "Sir!" FT called out. "When's the last time you had something to eat?" After a less-than-convincing response that he was all right, FT gave him a sausage biscuit and her cappucino, which he seemed to appreciate. (Interestingly the dogs, who generally get nervous around strangers in general and often actively dislike men, were very quiet and gentle around this individual. I told FT that she may have, as the Bible says, just entertained an angel unawares.) Ironic, I thought, that we feed our dogs McDonald's sandwiches while the invisible homeless in our midst go without.
We first drove to Beulah, in Benzie County, for FT's chosen alternative to birthday cake -- a delicious, warm ginger scone from The Phoenix Cafe, one of our very favorite destination spots up north. We enjoyed our scones and some Fair Trade coffee; then rubbernecked the rich folks' summer "cottages" along Crystal Lake, then headed up M-22 to the village of Empire, then to Leelanau County.

Words cannot express how lovely this part of the state is. Wind-whipped dunes at the edge of Lake Michigan; rolling fields; orchards and vineyards; woodlands; stunningly blue inland lakes. There are countless places for visitors to hike, bike, fish, canoe or kayak, picnic and just sightsee. The area has a tradition of maintaining honor-pay produce stands; we visited an entire produce store called The Ugly Tomato selling all manner of heirloom fruits and vegetables with nary a storekeeper in sight; just a box to put your money and a change jar.

In addition to preserving the Sleeping Bear Dunes, the National Park Service also maintains the Port Oneida Rural Preservation District , a number of historic farmsteads and other buildings; visitors can wander around freely, picnic in these old backyards, eat an apple from an abandoned farmyard orchard.

We drove up to Glen Haven, an old abandoned village that the Park Service has turned into a kind of living museum, and let the dogs run around the beach for a little while. Then we headed for Glen Arbor, a kind of upscale tourist trap of a village that had all but pulled up the sidewalk for the season, then made our way to Leland .

Leland is known for Fishtown, the remnants of the original fishing village along the docks that have been restored and turned into specialty shops selling everything from Docksiders to ice cream. There are numerous charter fishing operations and boat rides to the Manitou Islands, and one still-extant fishing operation whose owner is about fourth-generation; you can buy the freshest fish imaginable right next to the big lake. We wandered around for a bit, until the hungries got the best of us and we wound up back down the street at the Stonehouse Breadworks, an artisanal bakery that also runs a great little deli with delicious sandwiches and soups, and local artists' works on the walls.

After lunch we decided to go on a wine tour . Some of you may not know that Michigan's Grand Traverse and Leelanau Peninsula areas enjoy a burgeoning and increasingly respected wine industry. There are maybe 15 wineries in the general area. We didn't have the stamina to hit all of them -- plus we needed a designated driver -- so we bypassed Good Harbor Vineyard, which we'd visited before, and instead meandered through the peninsula to find Gill's Pier, Bel Lago, Chateau Fontaine and Longview wineries. What fun! Most of these establishments are visually pleasing, with helpful and friendly staff -- most often the owners, who are visibly proud to show off their creations. We bought some chardonnay, pinot gris and pino noir -- the latter being something of a challenge to grow in the northern Michigan climate, which makes it more special -- and even some cherry wine. If fruit wine makes you think of Boone's Farm or your great-uncle's scary homemade concoctions -- you will be most surprised by a well-made semi-dry cherry wine; it'd be great with ham or roast pork. At the Longview Winery we tried one of their cherry wines with a homemade chocolate truffle -- it tasted just like a cherry cordial.

A moment of family drama at Lake Leelanau, where we'd stopped at a public access to give the dogs a break: We were standing on the dock when Cody suddenly leaped -- he did not fall, but leapt, legs out like a flying squirrel -- into the water. Now, back at home he does this in shallow water where he hits bottom; here he foundered in the water, his head sinking under, until the intrepid FT jumped in up to her waist and fished him out. (Good thing we overpacked clothing.) We've decided that The Man needs his own pint-sized doggy life jacket for future trips. 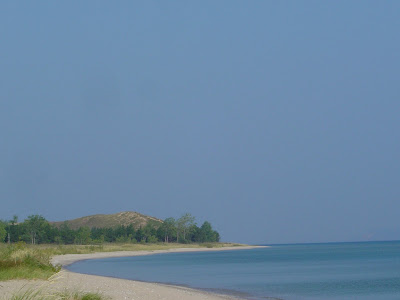 Our original plans had called for a stop in Frankfort, on Lake Michigan, for some terrific sushi at a restaurant called The Fusion...but by the end of the afternoon the birthday girl wanted something more substantial, so we headed for another favorite area restaurant,
Joe's Friendly Tavern in Empire, for some good bar food -- a "County Fair" chili-cheese-fry burger for her and a whitefish sandwich for me. This is the place where, earlier this summer, we'd enjoyed sweet potato fries with cherry salsa, whitefish fingers and cherry-Buffalo-sauce chicken wings. If Glen Arbor is like the Beverly Hills 90210 of the region, Empire is more like Haight-Ashbury; artists, hikers/bikers/kayakers and general bohemians. I could live there, I think.

We got back to Outer Podunk at a fairly reasonable hour...exhausted but very happy. A good time was had by all.

And I should add that, when FT got home, she also found a birthday lawn mermaid in her garage. Again, not every gal would want a mermaid and harmonica and bobblehead and back scratcher...but she did. That's why I love her!
Posted by LutheranChik at 2:21 PM

I'm curious about who you are. I found your post most interesting. We spend a lot of time in Lelanau County--absolutely love those places you mentioned. One of our Writers' Retreats in up that way. Check out http://michiganretreats.blogspot.com/

Ruth, are you acquainted with the Morningstar "ecofeminist" retreat center in Leroy? I know they serve a constituency of women from the western Michigan RCA/CRC world. It's a great place for reflection/recreation.

Except for the 5:20
A.M. part, it sounds like a perfect weekend. And you even got to take the dogs!

LC, I have been to many of these places --I love it when you write about them, because you bring back good memories for me.

Whaddya think the leaf season will be like this year?

Actually, we were shocked to see as much color as we did...many of the maples and ash trees were already beginning to turn. They've had quite a drought in northern Michigan this year which I think is hastening the fall colors, along with our recent cooler nights. I'm afraid that by about early October all the leaves will be off the trees!...so if you're heading up north leaf-peeping I'd suggest you do so within the next three weeks, just judging from what we found.