With the disclaimer that listening to a bunch of earnest, neo-Calvinist Intervarsity/Navigators-type men (they're always men) doing theology together is my idea of what hell's waiting room must be like...you can read what they think about ELCA Lutherans here and  Internet Monk, specifically the comboxes attached to the series on problems with Evangelicalism (written by an Evangelical-to-ELCA fence-jumper) and the discussion of Lutheran baptismal theology (always good for a cagefight in them thar parts).

Actually, I think hell's waiting room would be more fun. Except maybe for the smelly BP executives dripping crude oil and dead fish over in the corner.
Posted by LutheranChik at 5:07 AM 4 comments: 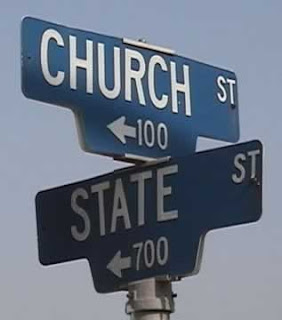 Generally speaking our Worship Committee does an outstanding job, with very limited resources, in planning our music and other worship elements from week to week.
Memorial Day weekend is always a conundrum, though, when patriotic glurge regularly collides with good theology; and this weekend Trinity Sunday made the mess even worse.
So we got "America the Beautiful" as a prelude, and -- argh -- "The Battle Hymn of the Republic" as a closing hymn.
I was assisting today, and after the last note of that hymn, when it was my turn to announce, "Go in peace and serve the Lord," I put a special emphasis on the word "Lord." I doubt anyone noticed, or if they did they probably attributed it to some sort of verbal tic; but it felt good.
Posted by LutheranChik at 1:36 PM 3 comments:

So it's finally taken a bout of procrastination -- in this case, putting off trying to write about John Calvin for our church blog's regular "Saints Alive!" feature -- to get me to post here again.

I hope you're having a pleasant Memorial Day weekend. We spent a spontaneous two-day mini-vaycay up in the Leelanau, on what we told ourselves was a reconnaissance mission for The Kids to price wine for their Michigan-themed wedding in August; we began our journey home just as the weekenders' cars started multiplying in the opposite lane, and laughed at our good fortune all the way south. When we got back home I did some gardening; we went on a ride in the country yesterday evening and treated ourselves to ice cream; today we're going to grill some steak.

(Yes, I know; all part of that big, scary Gay Agenda. If you don't watch out your spouse or significant other may ask you some late afternoon if you'd like to go out for a sundae and a spin around the scenic back roads of your county, and then maybe you'll find yourselves taking a long weekend away, and pretty soon civilization as we know it will crumble into ruin.)

Meanwhile, though, we had to do something very difficult.

Four months ago, at the behest of our pastor, we met a woman he had encountered in the course of his volunteer first responder work. She was in her early 40's; had no family or friends in the area or even in the state; had gotten here through an abusive relationship with the father of her small child and wound up in a shelter; was in a custody fight for the child and had a constellation of other personal problems. Our pastor thought that she might benefit from the influence of strong, independent women who could give her a glimpse of an alternative to the sort of dysfunctional situations she seemed to be falling into with regularity. Her stated plan was to leave Michigan for her home state as soon as she could legally do so with her child; it sounded as if she had family there to help her make a new start, and the shelter (one of the best in the state) was setting up a plan to get her temporary housing and other assistance in the other state as soon as she arrived.

Because both Fellow Traveler and I have a tendency to fuzzify boundaries when we hear sad stories and wind up being taken advantage of, we set up some initial ground rules for ourselves when engaging with this person: We weren't going to give her cash, ever. We weren't going to invite her into our home. We weren't going to run errands for her. We were simply going to be friendly voices on the phone, giving her encouragement; and because she'd asked, we were going to take her to church with us, even though it meant getting up an hour earlier and driving to another county to fetch her and take her back. We even figured that we would make Sundays into an outing and treat the woman and her child to lunch. We'd been given a timeline of about a month and a half for her legal status to be resolved, so we thought that was a reasonable commitment of time and resources. We also consulted with our council members and discretionary-fund committee and came up with the means to send the woman and her child back to their home state as soon as she was legally able to leave. Our quilting ladies gave the little family a quilt to take home with them.

But after an initial month of what we had felt was a positive experience, this happy scenario of do-gooder do-bees and soon-to-be-vindicated mother-in-distress began to unravel, for a number of reasons; without going into detail, while we had enough background into this person's history to know that the situation was complicated, we suspected that another backstory was going on, concurrent to our having gotten involved, that we were not a party to. Meanwhile, the ex-boyfriend's attorney had managed to delay hearing dates, so our short-term commitment was stretching ever farther into the future. This began taking a toll on us, our good will, even our health; we'd get home from our Sunday odyssey and promptly fall asleep, exhausted just by dealing with her multidimensional neediness. This past Sunday was particularly stressful and troubling.

The woman had an important hearing this week, so we were surprised when she didn't call us to tell us what happened. We suspected it was bad news; but when we got ahold of her, she told us she'd been awarded joint custody and had been given permission to go back home with the child; the outcome she had consistently told us she'd wanted more than anything else and that the shelter, as far as we knew, had also been planning on. But now she was waffling: "I have to make some decisions...I may not go there right away..."

At that point both Fellow Traveler and I had had enough. So we told her that we had taken her about as far as we could; that if she were going to be living where she was for an extended length of time she needed to find a church home in that community, and that the staff there -- who'd invited her to their churches in the past -- would be a good resource. We told her that we weren't planning on breaking contact with her, that we wanted to hear from her about how she was doing, that we wished her well, but that we simply couldn't maintain the weekly schedule of driving her back and forth. She didn't say much in response. And that's how we left it. We haven't heard from her since.

I am trying not to be disillusioned or bitter here, particularly because we'd been informed about much of the mess we were stepping into when we said that, yes, we'd keep track of this person. I also know that we were just two little part-time-volunteer church elves on the periphery of  what is really a very commendable, comprehensive program for families in crisis, and that this person has an entire staff of trained people working and advocating for her, who are responsible for her much more than we ever were and who have the expertise and means to assist her and her child more than we ever could.  But, that said...we're not going to do this type of favor anymore for people we don't know. If that makes us bad Christians, well...just add lack of hospitality to our Bad Behavior list.

We have a wonderful life; we have a summer busy with family responsibilities; and we have a commitment to one another, to help and support one another. We want to invest more time and energy in one another and our life together.
Posted by LutheranChik at 11:49 AM 1 comment: