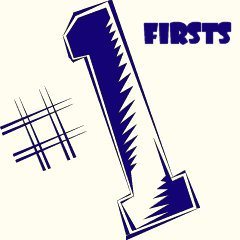 This week's RevGalBlogPal Friday Five asks us to share our "firsts":

Your first "place" - whether it was an apartment, dorm room, or home with a new spouse, the first place where you really felt like a grown-up:  The first of my places that felt like a place was a unique but decrepit duplex, just off campus, that two friends and I shared starting the summer after I graduated from Michigan State. The building dated from the 30's or 40's, had some appealing features like built-in bookcases, round archways, a lovely staircase and large, sunny bedrooms. But it also showed the wear of housing generations of college students. The interior paint seemed to be layered about an eighth of an inch thick, and the newest paint had been carelessly slopped on the glass of the window panes, kindergarten art class style...of course, this paint was probably the only thing holding the glass in the windows. In the wintertime we covered the windows in Visqueen, and on windy days the plastic would billow out like sails on the high seas. We also dealt with the small galley kitchen's perpetually leaking refrigerator and a stove whose oven featured a loose, frayed wire inside that just dangled ominously in the back like a bomb fuse -- not that that stopped us from using it. Our supers, who lived next door, were a contentious couple who loved fighting -- very loudly, usually at 0-dark-thirty in the morning, one party having locked the other party out of their own duplex -- about as much as they loved smoking pot; which may have explained our paint job. But anyway, despite these problems, we loved that duplex. My mom,inspired by the peach-and-gray-tiled vintage bathroom, sewed us curtains for the window above the tub; I planted flowers in the unpromising, rock-hard soil next to our front steps, inspiring our scary punk-rock-band neighbors on the other side to plant a tomato garden. Good times. I cried when I had to move out of that place, and was saddened many years later when I was in town for a visit and found that the entire building had been razed to make way for a strip mall.

Your first time away from home. Construe this any way you want. College? Girl Scout Camp? Study Abroad?  My first times away from home for any extended time were summer visits to my aunt and uncle, who lived on a farm a few miles away from ours. These were my mom's brother and sister, who never married; my aunt had struggled with mental illness as a young woman, and although she seemed to have been successfully treated at the state hospital in Traverse City, she abandoned her hopes for an independent career and simply wen back home,, and my uncle felt responsible for taking care of her. They were not prosperous farmers, but they were fiercely self-sufficient and frugal, so a trip to their house was like a trip back in time: my aunt had a huge vegetable garden and an orchard  and preserved countless jars of canned food, the house had a wood stove and no water heater, and meals were pretty much a continuation of the Depression fare my mother and siblings had grown up eating -- fried bologna cups filled with canned peas, tubs of peanut butter on my aunt's homemade bread, pans of fried potatoes.

My aunt and uncle were great readers and had an eclectic set of interests. My uncle was an expert trapper who supplemented the family income with furs and liked to read informational and adventure books about the out-of-doors; he was something of an amateur expert on the local Native American history and had over the years amassed a large collection of arrowheads and other artifacts found in his farm fields. My aunt loved old books -- old turn-of-the-century young-adult novels featuring smart and plucky Campfire Girls and college students,  literature textbooks, travelogues about exotic locales -- and I spent many rainy-day afternoons in the spare bedroom with a book from her collection. She also loved sewing and crafting, and while I never did "get" quilting, her favorite hobby, she did teach me skills like rick-rack lace-making and embroidery. And both my aunt and uncle were formidable sources of outdoor lore; I also spent many hours with them learning about plants and wildlife and agriculture. (And, like Tom Sawyer, they had a knack for turning tedious low-tech chores into fascinating activities for me.)

Your first job in your field of endeavor (so, not babysitting, unless you are A Professional Babysitter today):  My first real job in the realm of writing was only tangentially concerned with same: After slumming for a couple of years in my university town I took a job as an advertising salesperson for a weekly newspaper in a small town near my own. My boss, the editor/publisher, was a pretty interesting individual -- he was a very tightly wound fellow, someone who actually growled like an animal when he was angry (which was a lot of the time) and who once, in a fit of rage directed at our reporter, threw an X-acto knife into the ceiling. On the other hand, he could be very charming on rare occasions (although rarely to the town fathers and local merchants), and he also took his role as local journalist seriousy, right down to his worn trenchcoat and ubiquitous press pass. I pretty much hated the sales side of my job, which was made more difficult by my boss' reputation in the community. I did very much enjoy copywriting and ad design, and I also did a fair amount of typesetting,  which pleased the bosses because I was a good proofreader who cleaned up copy as I went. This job only lasted a year; the economy went south, and I also think the boss figured out I was miserable. But I did learn a few useful things during my short tenure. And I think everyone should have a sales job at least once in their lives; it's good for you, like cod liver oil and juiced kale.

Your first time hosting. Again, construed broadly, this could be a dinner for the in-laws, your first time to have guests for a holiday meal, etc. Believe it or not, I was never in a living space where I wanted to personally host any kind of party or dinner or other event until I met Fellow Traveler -- often a guest, never a host. I must have co-hosted Thanksgiving dinner with her that first year; but the meal that I remember was Easter the following spring, when we had FT's sister and niece over and I made leg of lamb with Greek roasted potatoes and other Mediterranean dishes. The food was fantastic; we made a good impression; and my sister-in-law keeps accepting our invitations to dinner.

Your first love.That can be a person or something else!! With apologies to my partner -- my first love was probably the red plaid flannel, faceless doll my mom sewed for me when I was a baby. I slept, teethed on, hugged and dragged that thing around until it was as ragged and funky as an old dog toy. That was the first -- and last -- doll I loved.

Reader bonus: A cinematic classic on the topic of "first": http://www.youtube.com/watch?v=kTcRRaXV-fg.