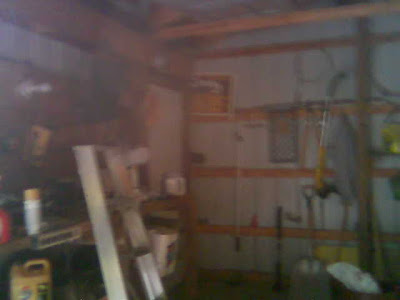 Let me start out by saying that I'm a ghost agnostic. Ghosts don't fit easily into my theology; while I don't question the veracity of people who report experiencing ghostly phenomena, my impulse is to find non-supernatural explanations.

Now, having said that...

...my garage may be haunted. By my dad. Or a reasonable facsimile.

Fellow Traveler, who's spent some quality time in my garage, reports an ongoing eerie sensation of sharing this space with...well, someone. She says it feels like a benign someone; a curious someone; a paternal someone.

When FT first shared this with me, my skepticism meter went on the uptick. Maybe this entity was one of the beady-eyed, furry, entirely corporeal critters that inhabit the garage rafters. Maybe my stories of my dad spending hours in the garage doorway, smoking stogies that he was forbidden to smoke in the house, had fired her imagination. And frankly I'd never felt anything even vaguely supernatural about this building.

But then FT told me that, one day while she was working in the garage, listening to the local oldies station on the radio, the signal suddenly turned to static...then she found herself listening to Rush Limbaugh.

That made the hairs on the back of my neck stand up.

I can't bring myself to call this whatever-it-is "Dad." So I call him "Hank" -- my father's nickname. FT says she sometimes finds herself talking to Hank -- saying hello; sharing what she's doing; telling him to back off when he's a little too there.

I suggested that maybe Hank hangs out with her because she's the child-in-law he never had in his lifetime.

One imaginative but non-supernatural explanation for ghosts is that it may be possible for time to periodically fold in on itself, so that two separate times may collide, so to speak, in one place, and people in one time experience phenomena related to the other time. If you think about it this way...maybe all those hours when my father was sitting in the garage, he was feeling a strange but not unpleasant presence there with him...a middle-aged woman who was interested in his car and his tools and his fishing equipment. Maybe he talked to her, even.
Posted by LutheranChik at 5:10 PM

You know, your final para is the best explanation I've ever managed to come up with about this sort of phenomenon.
It's kind of nice, on that basis, that Hank and FT are getting to know each other...

There is a woman in one of my congregations and a man in the other congregation who are able to see and talk to dead people --I have no reason to disbelieve them, particularly since I myself have twice had similar experiences ...

I'm a bit of a skeptic, too, but the Hippie claims to spend lots of time with his grandfather when he's doing carpentry.

I like your explanation about 'folded' time, as well. :-)

Wow is right. This is a great story that really makes one think.

Maybe, if Hank's hanging out with FT, in this time or some other one, it means he would have eventually been ok with who FT is and how she found her way into his life. I hope so.