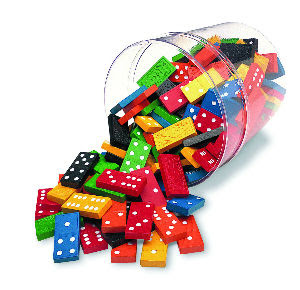 I have a confession: I don't know how to play.

It doesn't matter what. I don't know how to play.

I grew up under the double burden of being an only child and of living in a household where, thanks to my father and his own upbringing in an ueber-Pietist family, playing games was considered evidence of sloth and general faulty character. My grandparents, "the old folks," would get together with neighbors for penuchle, but their children were rarely allowed the same privileges. As an adult, my father would watch Tigers ballgames with his uncles, but he would never actively play games of any kind.

My mother's side of the family was entirely different; they grew up playing board games and Victorian parlor games like Truth or Consequences. But my mom never felt comfortable playing games with me; she always seemed to be looking over her shoulder, waiting for spousal criticism, and I absorbed that anxiety.

Fellow Traveler loves to play games of all kinds. So the past year and a half I have been on a learning curve as far as learning how to relax and enjoy games. It's hard for me. It's hard for me to learn games that everyone else, it seems, has been playing from early childhood. It makes me feel alien and stupid. My palms actually break out into a sweat while I'm playing.

But I am persevering. We want to try Family Game Night as it grows colder and darker; dominoes and Skip-Bo and whatever else strikes our fancy. I really think this is an important part of my therapy. I want to play.
Posted by LutheranChik at 5:15 PM

I think you "play" in other ways, such as cooking and side trips. But I know what you mean...we have both ends of the spectrum in our house. My DH will play games that have an educational content.

We only need one lawn chair here and it isn't for him.

I will happily serve as your gaming tutor-- I love games. There really is something Sabbath-like in taking time away from the usual hussle and grind and just spend time in the moment, talking, playing, munching (you gotta have snacks!).

Our boys are still young so we're mostly still in the Uno/ Candyland/ Sorry/ Monopoloy Jr phase. Looking forward to future years when we can get into the great strategy games, maybe even work our way through Games Top 100 classic games.

There in Outer Podunk in cool evenings you might enjoy some great active games too. Sardines is great fun played by a group of adults in the dusk of the evening...

I think we tried to teach you euchre once. Find another couple and do learn to play some card games.

But...my nephew-in-law did cajole me into playing Texas-hold-em this summer at a family get-together, and I was actually able (with coaching) to understand it, sort of.

LC, I know a domino game from Texas that most people up here have never heard of. I could teach you how to play "42" and then you'd be the knowledgeable one and everyone else the learner.

Is it easier than Chicken Foot?

Hi! I came across your blog via an ELCA bloglisting. =)

I'm not the greatest at games, either. Except Scrabble. I LOVE that game. =P

The rumor is that southern baptists invented it so they could play, but never have to touch those demon cards