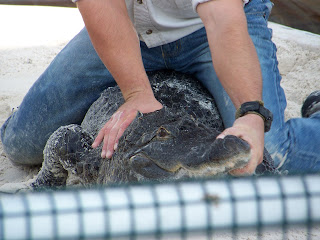 Here's a gator getting wrestled at Gatorland. Gatorland is a once-in-a-lifetime adventure -- and I do mean once in a lifetime. Granted, this stop was on our itinerary purely for its irony value, but I'm not sure that irony is worth almost $25 a pop. 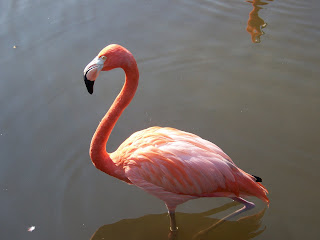 One of the classier citizens of Gatorland. 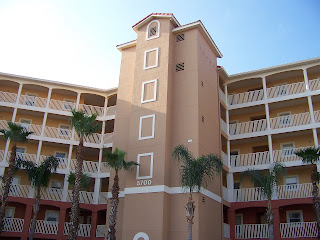 A shot of our timeshare building -- I should say, of Fellow Traveler's cousin's timeshare. While we were most grateful to be able to use it for a whole week, I have to say -- what a racket. You can't spit on property without hitting an obnoxious, commission-fueled sales representative. We spent much of our vacation thinking up ways to avoid the supposedly mandatory "maintenance meeting," which was really a sales meeting where the reps went one-on-one and sometimes even two-on-one on vacationers. 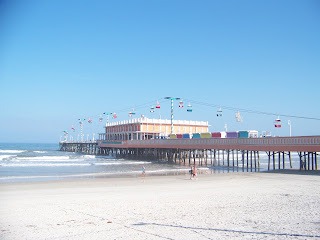 On the beach at Daytona, land of rednecks and old hippies. We spent some quality enjoyment time here at the arcade, playing skeeball. Sadly, we're told that the tacky charms of the beach are headed for the bulldozer soon, making way for condominiums. (You'd think that the vast stretches of overdeveloped property and abandoned commercial projects in Florida would send out a strong hint that "Build it and they will come" is no longer an astute real estate marketing strategy, but some developers seem to have a flat learning curve.) 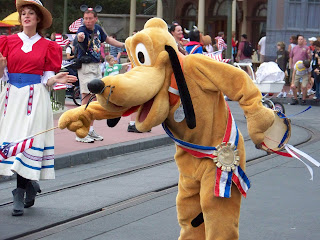 Pluto busting a move in a Disney character parade. 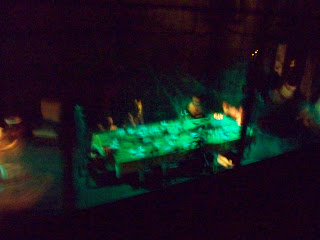 A spectral scene inside the Haunted Mansion. 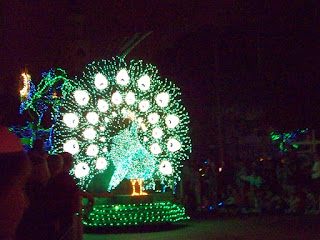 A bodacious peacock float in the Electrical Light Parade. This was one of the coolest attractions inside the Magic Kingdom. I was frankly something of a Magic Kingdom skeptic before going, but this parade does make you smile, and ooh, and ahh, no matter how jaded you may think you are. 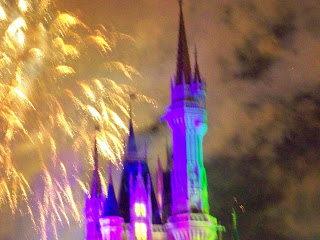 Speaking of oohing and ahhing...a scene from the nightly fireworks finale over the Magic Castle.
Posted by LutheranChik at 1:42 PM

We just got back from the West Coast version. The "twofer" package is a pretty good bargain. Newly redone sub ride (with extra nostalgia pts) was our #1 pick. Sadly for some (but not all) in our party, It's a Small World was closed. The electrical parade was always my fav too. They actually axed it a few years back, but the hew and cry brought it back.