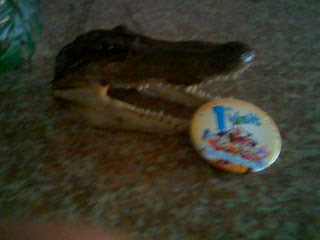 I'm so grateful to have Semi-Stepson and his partner as tour guides. For one thing, the Orlando area is so confusing to me that I'm always completely disoriented as to where we are; if it were up to me to navigate we'd probably wind up on a swampy two-track in some rural county an hour away, fending off Darryl and his other brother Darryl. But Semi-Stepson and Semi-Stepson-in-Law are not only seasoned Floridians -- SSIL is that rare creature, a native Floridian -- but they're Disney/Universal insiders who've worked at the parks for years, and the absolute best companions there. They're also entirely entertaining. (And, after hearing my wish to find the absolute tackiest souvenir, presented me with the taxidermied gator head you see here.) It's funny though -- while Fellow Traveler and I ooh and ahh over the sheer entertainment value of the various places we visit, these two critique them on a creative and managerial basis -- "Good lighting"; "Bad scripting; it takes too long to figure out why that character is even in the show"; "Oh, we know [insert Disney or Universal character here]; he auditioned for another part but obviously didn't make it." Oh -- and we have come to learn that cast members in their civvies cannot tell you that they play So-and-So; "Friend of" is the code language, as in, "I am a Friend of Spiderman."

I believe there is an industrial plot afoot to keep tourists in a perpetual food coma here. The portions are insane. Our plan to keep to our diets rapidly devolved into "Well, we'll eat a light breakfast." So we eat our sugar-free yogurt in the morning before bellying up to the plate later in the day. So far -- I guess I can speak for Fellow Traveler as well -- we had family meetups at PF Chang's and Buca di Beppo, and so far those have been our favorite restaurants; excellent food and pleasant surroundings.

One of the small wonders for this horticulturally sensitive northern tourist is seeing what houseplants look like planted outside, all grown up.

We can't believe the construction here. The humungous resort where we're staying is in the process of further expansion -- I'm listening to cranes and bulldozers as I'm typing this -- and there's similar building going on everywhere. If Florida is in an economic slump I can't imagine what it's like when it's not. What saddens me is the increasing marginalization of both wild land and farm land -- yesterday I saw an anhinga drying itself off next to a postage-stamp-sized pond in the freeway meridian, and a couple of tiny cattle pastures hanging on despite resort construction on both sides.

I think it would be very easy to fall off the Christianity wagon in Florida. Three days and I've had it with the Christians -- the obnoxious "Turn to Jesus" skywriters who seem to make daily runs over Disney World (do they really think they're creating any metanoia moments?); the Christian jihadist families whose patriarchs sport normal tourist polo shirts and shorts while the long-locked womenfolk have to schlep behind them in supposedly "modest" (as in "Hey! Look at me! Look at me! Look at how holy and pure and Bible-believing I am! Look! Look! Look!") long denim skirts and knee socks, the families sullenly trudging through the Magic Kingdom as if they're on their way to a proctology clinic. Yes, I so want to be like you -- NOT. Pour me a margarita and throw me to the heathen, baby,if these are my two local Protestant alternatives. (An amusing note: At Buca di Beppo the other evening our large party was seated at what's called the "Pope Table," in a recessed area filled with photos of old-school religious types and portraits of popes. An almost-life-size plaster bust of the current Pope, encased in plastic, sits atop the huge lazy Susan on the table. As other dinner parties came by, and the host or hostess pointed out the Pope Table as a future option for large gatherings, we started mugging -- pointing the Pope in their direction, calling out "Bless you, my children!", making benedictory gestures. The reaction was generally either hilarity or disapproving glare. We guessed that those exhibiting the latter were actually cranky Protestants -- of which, as I say, there seem to be lots of around here.
Posted by LutheranChik at 4:46 AM

Have a warm time. We're supposed to drop 60 degrees between last evening and this evening. Ice everywhere.

Actually our first two days here it was unusually cold. Thank heaven we brought our L.L. Bean boating jackets, which are light but warm. We were out with the extended family playing putt-putt at Disney Sunday evening, and the weather was comparable to an October evening in Michigan; I wished I'd had gloves.

Today it's supposed to be sunny and 75. Our neighbors/housesitters told us yesterday that it was snowing. Heh-heh-heh.

"Pour me a margarita and throw me to the heathen" just captures it EXACTLY. Thank you for this word in season...

I have to laugh about the food coma comment. Living in Dallas was like being immersed in that all the time - particularly at work. Even working out 5x/week I gained weight until I forced myself to be more disciplined with my diet.

I am off to Fort Lauderdale this weekend. We're supposed to have an ice storm on Friday so I am keeping my fingers crossed that I get out in time.