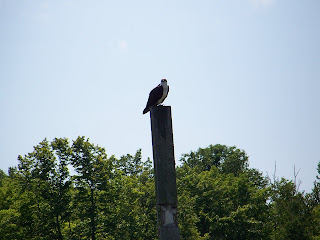 This week RevGalBlogPal Mompriest asks: For this Friday Five, share with us a wild animal story from your life. Or if you've never had such an encounter share with us your five favorite animals, and why. Bonus for videos and photos!

And, on cue, I produce a photo of a wonderful wildlife encounter we had this week on the Garden Peninsula of Michigan's Upper Peninsula...this is a little curled finger of mostly farmland that juts out into the north shore of Lake Michigan between Escanaba and Manistique.

We were backtracking from a drive down the highway that runs lengthwise down the peninsula, through the village of Garden down to the ruins of the historic Fayette iron-smelting town, then on to tiny Fairport at the tip, when we stopped at a small cemetery just south of Garden to let Gertie burn off the energy that builds up when she spends time in the Jeep. (As regular readers know, our dog loves to slalom around cemetery stones.) As we approached, we noticed a large bird sitting atop a pole planted in the middle of the graveyard; as we drew closer I recognized it as an osprey, a "fish hawk"; these are not necessarily uncommon in Michigan, but pesticide use in the 50's and 60's and ongoing habitat destruction have taken a toll on their numbers. The bird sat impassively as we pulled up to the roadside.

"Look," said Fellow Traveler. "There's its nest." At a corner of the cemetery stood a much longer pole with a nesting platform and second osprey sitting atop, covered with assorted dead branches and a jaunty sprig of what appeared to be cedar poking up from one end of the nest. A human benefactor had added a plastic owl to a nearby post, apparently to scare away possible predators.

I slowly got out my camera, while the osprey on the lower post fidgeted. I was able to take one picture before it flew away, accompanied by its mate, to a telephone pole a short distance away.

This was the best wildlife encounter we had on our entire trip, including our unintentional excursion into the southern edge of the Seney Wildlife Refuge the next day during a random adventure into the countryside. We wish long life and many successful fledges of youngsters to the osprey family we met.

Bonus: I'm an animal person; have been since I was a child growing up on a small farm that was a veritable Wild Kingdom of fascinating beasties large and small. It's hard for me to pick favorites. But I will name five wild animals that I enjoy and admire.

1. Wolves. I admire wolves for their intelligence, cooperative behavior and well-ordered social life. They often seem to be a more well adjusted species than homo sapiens.

2. Crows and ravens. I like members of the crow family for all the same reasons. I think there's a lot more going on in their "bird brains" than even animal behaviorists think, which is why our ancestors -- across cultures, I may add -- considered them significant, sacred creatures.

3. Chickadees. I love the childlike nosiness and friendliness of chickadees; the way they'll, with little prompting, sit on your hand when you come out to fill the bird feeder in the wintertime, and the way they'll respond to human mimicking of their happy "dee-dee-dee" call. (The ominous two-note song that sounds like an English police siren is the unhappy chickadee call.) I remember being on retreat several years ago and encountering a family of chickadees in an old spruce plantation -- Mom, Pop and several newly fledged youngsters. They acted as if I were the first human they'd ever encountered close-up. They perched within touching distance; they clowned around like little parakeets, swinging on spruce cones and hanging upside down from twigs. When they sang "Dee-dee-dee!" I answered back, which seemed to delight them and animate their antics even more. Apparently I was the best entertainment they'd had in the neighborhood in a long time.

4. Robins. Robins are another species whose ease of interaction with humankind I find touching. I remember, back at Cold Comfort Cottage, digging a flower bed one day and finding various obectionable things -- grubs and cutworms -- in the soil. A curious robin had been watching from a short distance; I tossed a fat grub out onto the lawn, and the robin immediately snatched it up and took it away. The robin came back; I kept tossing worms in its direction, and it kept taking them. When I was done, we kind of exchanged nods and went our separate ways. Interspecies cooperation -- it's a good thing.

5. Coyotes. I have only seen a coyote in action in the wild once -- I saw one slinking through the grass in a woodland clearing near Lake City. But I love their smarts and adaptibility. I also enjoy their mournful-sounding little howls.
Posted by LutheranChik at 8:27 AM

We have an abundance of Ravens where I live, and they are glorious in flight. I'm also grateful that they do such a wonderful job cleaning up what other's (or, uhm cars) leave.

I love your robin story.

In Oregon a few years ago I was thrilled to see (through a telescope)an osprey on its nest, and was told that they nest atop dead trees--so, many dead trees should be left to stand, for the ospreys' sake.

Oh, I love the chickadees and robins too. I'll have to try to teach my little one the chickadee call. They are some of the cutest birds. And not cruel like sparrows.

The robins and wood thrushes delight in playing the game with my more inexperienced boxer to see how long they can hop before they make her run for them. She is like a cat and tries to stop and pounce before the final attack. She's not as sly as a cat though and always fails but has yet to give it up.

When I had a place in Orient, NY the residents put up platforms on telephone poles-non working-in the wetlands and the Ospreys made nests. It was fun to see the babies. The Osprys mate for life.

Lovely little essays. I didn't know that the chickadees would sit on someone's hand. I'll have to try that sometimes. We have them aplenty. We've enjoyed the goldfinches this summer. They nest late, as they wait for the thistle down to come out, but maybe with this summer being so slow, they won't get their broods fledged. I'm going to FB you the title of a book of bird essays you might enjoy.