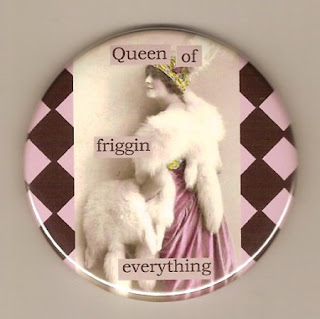 RevGalBlogPal's prologue to this Friday's Five begins:
Lately I seem to be encountering many people who have a very difficult time finding anything good to say about themselves. They are able to extend grace and forgiveness's to others but find it difficult to extend that same grace to themselves.

With that in mind, let's share some healthy affirmation today! Tell us five things you like about yourself!

1. I have a quick wit. I find humor in much of what goes on around me. It's kind of a survival skill. I'd hate not to have it.

2. I like to learn. I never, ever want to stop learning things.

3. I know how to express myself verbally -- a skill that's gotten me far in this life.

4. Animals love me. With few exceptions, I seem to be able to make up with most beasties...even feral cats and wild birds. I consider it a gift and a privilege to be able to engage in cross-species rapprochement.

5. I can cook for my own and others' enjoyment, even in my own inuitive/untutored way. (Don't ever watch me cut up vegetables, for instance -- Gordon Ramsey would drop a Hiroshima of F-bombs at my less than finessed technique.) I know some people struggle mightily with this skill, which they think of as a chore; but I love it.

Cooking was my recreation while in seminary. I love it too! And I admire your gift with animals. I'm often good with them, but every now and then there's a boner in the lot that makes me think otherwise!

I think my greatest kitchen accomplishment has been learning to prepare dishes for family/holiday meals so that everything gets done at the same time. My late mother even commented that I was better at this than she was. And I'm not a left-brained person, so it's not a matter of detailed timing; I just tend to get it right. I don't understand it, but I'm not complaining.

I can definitely relate to the first three- though not so much the cooking and animals. Well, animals like me, but my allergies don't like them.

I envy your quick wit. My husband has it; I don't! I do share your gift with verbal skills, but didn't think to add it to my list. It's definitely a useful gift.

I'm glad it felt good! And speaking of humor, the pic made me laugh out loud.