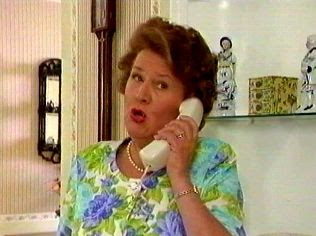 I got a card from my aunt this weekend.

It wasn't a Christmas card; just a notecard. And no "Merry Christmas"; instead an 'I"ve been trying to find you" followed by the story that one of her neighbors had found something belonging to my deceased uncle, and she wanted to know if I wanted it.

Let me be frank: I don't like this aunt. If you can imagine an Upper Midwestern version of Keeping Up Appearances'  Hyacinth Bucket, you'll have an idea of what she's like: vain, overreaching, self-important. She was an interfering force in the early years of my parents' marriage and made my mother's life miserable long afterward. She was also unkind to my mother's family, and never missed an opportunity to indicate, in word or deed, that she felt her brother had married down in the world.  In my adulthood, the only time she has ever contacted me it's been to ask me to do something for her -- to get her a job at my former place of employment; to help her find an apartment; to look for in-home help for an uncle (my suggestions promptly ignored).  My aunt is a Church Lady with a wide network of churchy friends and two sons, and doesn't want for any kind of advice or assistance in living.

Since my father died, my aunt has also been engaged in a kind of silent war of grave decorations at his cemetery. No matter when my mother and I, or later on Fellow Traveler and I, would arrive in May with our Memorial Day flowers, we'd find our aunt's there front and center. The year before last I conceded defeat and let her flowers have the prime headstone spot; last year I moved her flowers back to one of the other relatives' graves. Yes, this is petty; I'm just sayin'.

When my maternal aunt died last year after many years in the nursing home and we arranged a quick private burial service, I received a sympathy card  shortly thereafter with the terse message, "I didn't know!" Well, of course you didn't know -- because you weren't a part of my other aunt's life, and didn't need to know. My aunt is the kind of woman-of-a-certain-age who thrives on glurge and positively glows when given the opportunity to attend visitations and funerals; as I told Fellow Traveler, I wasn't about to give her an occasion for personal entertainment and nosiness regarding my own life at the expense of my poor other aunt, who was so often intimidated and shamed by her presence.

My experience of extended family has rarely been a positive one; I actually feel much more comfortable around Fellow Traveler's relatives. So my response to my aunt's note was a sigh, a roll of the eyes and a call, not to her, but to the neighbor she cited in her note, to resolve the issue with my uncle's stuff. I sent my aunt a nice Christmas card with a brief note thanking her for her concern and noting that the situation had been taken care of.

But I can't help feeling guilty about this. But I don't know why. I don't know why I can't be a grownup about this and say, "These are the boundaries I have chosen in regard to the people I'm willing to engage with on a regular basis." Maybe I'm channeling my mother, and her anxious, guilt-ridden relationship with her in-law. Then I think, "If Aunt ______ is affecting my mood, then she wins, doesn't she."

Sigh.
Posted by LutheranChik at 7:49 PM

I did not learn about boundaries from my family of origin. And so I've had trouble setting them and also communicating them. The family of one lovely aunt always set very crisp boundaries and I thought this was weird. I know my mother thought that this was an odd quirk in this family, yet I think these boundaries were so crisp to make sure my mother really "got it." She was socially dense. Past tense: although she is alive, her stroke change the social part of her personality.