Christmas Cards, to the Unchurched 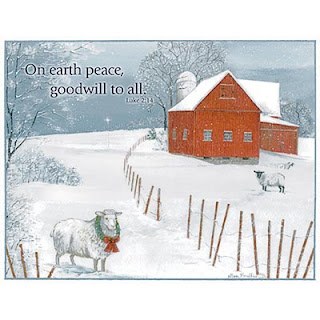 I know that in many Christian homes the sending of Christmas cards is an activity fraught with uncertainty and guilt: Should we buy separate religious and secular cards? What about the hybrid cards, with secular graphics but a religious message? (The picture to the right, by the way, illustrates one of our trifecta of card designs for this year, carefully chosen for each recipient based upon his or her anticipated reaction.) Am I "ashamed of the Gospel of Christ" if I don't send an explicitly Christian Christmas card?

Well, this year Fellow Traveler and I, as guests in our children's home, got to see firsthand the reaction of non-churchgoing, non-religious individuals to the reception of such cards.

Some background: The Kids are getting heavy pressure from Son #2's biological father and his partner to have our grandchild baptized -- preferably in a Roman Catholic church, although I understand that Grandpa, without consulting me, offered my services for a marginally acceptable substitute baptism. (I told Daughter-in-Law that I both understood and appreciated her viewpoint that making religious vows that she and Son #2 have no intention of keeping in regard to their child's religious upbringing is not living with integrity.)  So religion has become a newly prickly issue.

Then, to make matters worse, The Kids received a stealth-Christian Christmas card from maternal Grandpa -- someone who has no discernable religious affiliation, whose bad behavior has estranged him from his children for some time -- featuring a quaint English village illustration, with a non-sequitur Bible verse tucked inside.

With this subtext in mind...let's just say that the reaction was not pretty. "What the hell?..." I think was the common response of both kids to Maternal Grandpa's stealth CHRISTmas card.

- Christmas cards that look religion-neutral but have Christian stuff written in them are interpreted as being pushy and proselytizing in an especially creepy way.

- Both overtly and covertly religious cards, if sent by schmucks, are subject to particular scorn and ridicule. If you don't live it, then don't try to promote it.

- An alternative interpretation of a religious card sent by a family member to another family member known to be non-religious: They must have pulled this one out of the bottom of the drawer. If they really knew or cared about us, they'd know we wouldn't appreciate this.

Even though Fellow Traveler and I were not on the receiving end of this sentiment (we are not dumb enough to provoke our children to anger by sending them potentially objectionable holiday cards)...I for one still felt like I was taking one for the team listening to this excorciation of Christmas-card stupidity.

Why are Christians so pushy? Why do we think that some non-believer is going to have a metanoia moment reading a context-free Bible verse cut-and-pasted into a cheesy Christmas card? What are we proving, and to whom? Do we have a fantasy that God, working on the heavenly Excel spreadsheets, is saying, "Ah -- LutheranChik took a defensive stand in the War on Christmas by quoting the Gospel of Luke in her Christmas cards! Well done, good and faithful servant!"? Oh, please.

So Fellow Traveler and I will be, for the foreseeable future, maintaining our custom of multiple card designs for our multiplicity of friends, and hope that, for people who have issues with organized religion, what we do all year long says more about our faith than what Christmas card we send.

Posted by LutheranChik at 9:50 AM

Good grief, all too complicated. When I sent cards, I bought a couple of boxes and sent the same cards to everyone. Am I supposed to, really, buy different boxes and then make a ledger of who gets what? And how am I supposed to know if someone I knew at the Lutheran college I attended has fallen away from the faith?

Now that I do Christmas letters, it is about what the family has been up to and usually ends with a subtle statement of thanks to God and God's grace. I'm stating what I believe, not saying that everybody should believe that. And if a person reacts negatively, is that being defensive? And if so, that is not my responsibility.

I will say that I don't get a positive feeling from a Christmas card, of any type, that just has a person's signature inside. And I do wonder about completely secular cards, especially those that are cutesy from people I know who DO attend church.

I have always been cautious about how I write portions of my Christmas card or what verse or phrase appears on my Christmas card. This comes, in part, from being raised in a family that values pluralism and respects differences. It is underscored further by having a Jewish sister-in-law and a brother and sister-in-law who are Tibetan Buddhists. If I make distinctly Christian comments I try to put them in the context of what the Christmas season means for Christians (and thus, for me). I have used the phrase "season's blessings" so that the recipient might interpret the wish according to what the season means to them. But no matter how much care we take, we cannot anticipate the spectrum of views on the subject nor the reactions that spring from those views. In the end respect is entirely appropriate. How we express that will vary according to who we are.

Thanks for writing on this.

I tend to send out cards that say something about peace, and usually with a dove or a winter scene - think hoping for peace is good no matter what else one believes...

And for parishioners I send out something very Christian, Mary and the babe, or an angel. Yep, I do two separate cards too, but it's easy cuz the church folk are on mailing labels and the rest I hand write.

We're a clergy couple and all of our cards are Christian. We don't do it to proselytize, we do it simply because it's who we are. Nearly every year, we debate whether we should buy some "seasonal" cards but we can't bring ourselves to do it.

At the same time, we do not find non-Christian holiday cards offensive (though I realize there are Christians who do); we just appreciate the contact. Nor do I take offense at receiving a Hanukkah card from Jewish friends. We also do not assume that our Christian friends are 'ashamed of the Gospel' when they choose a secular card. Some of them are, after all, funny or entertaining!

Frankly, though, I agree with your family's sentiments with regard to getting overtly Christian cards from people who act in decidedly UN-Christian ways, whether or not they're churched.

And we write at least a short note in all the cards, filling folks in on the highlights of our year. It is, sadly, the only time that some friends really get news from us.

And I have to comment on the issue of baptism: As a pastor, I deeply appreciate your children's perspective! Their integrity is admirable, especially in the face of pressure.

Commenting on the Friday Five which seems to have comments turned off, greta play, loads of intentional stuff there. Hope 2010 is a good one!

I usually send religious-themed cards because that's who I am. It is CHRISTmas after all. The messages however tend to focus on the idea of peace and joy. I have to admit to being slightly offended that our new pastor sent secular SEASON'S GREETINGS to us.

I don't get offended when people take "Christ out of Christmas" by wishing me "Season's Greetings" or "Happy Holidays" instead of "Merry Christmas" so I don't think anyone should take offense if my "Christmas" card actually has something to do with, heaven forbid, Christmas.

Needing to proselytize people is NOT "giving an account of the hope we have in Christ".

Sending a non-religious card to someone who would be offended by a religious card is NOT being "ashamed of the Gospel"; it's showing respect for the person.