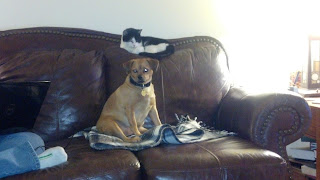 It's hard to believe that it's been almost three months since we lost the oldest four-legged member of our household, 15-year-old Mollie the cat, whom we had put to sleep after a short but precipitous decline in health.

Mollie began her life in the fetid trailer of a crazy cat lady in Maine. When local authorities finally raided the woman's property they found almost 70 cats, which they rounded up and sent to the local animal shelter; after they left, a neighbor noticed Mollie, then a tiny and emaciated kitten, sitting forlornly in the middle of the road. Knowing Fellow Traveler, and knowing she had a soft spot for rescue animals, she gave FT a call. And that's how Mollie came to be part of FT's pet family, eventually winding up in Michigan.

I'd known about Mollie for quite awhile before I actually met her. I was aware that she wasn't terribly fond of people and preferred to spend her days in a seldom-used spare bedroom. She introduced herself to me one morning via calling card -- a mouse's head that she strategically placed on my quilt while I was sleeping. Had I not already been a cat person this discovery would have probably led to a lot of screaming and perhaps some visits to my therapist, but because I know cats I understood this to be a kitty peace offering -- a choice morsel intended to communicate, "Hi. You don't seem that bad for a human." I was flattered -- at least as flattered as one can be staring into the lifeless eyes of a beheaded mouse. I knew I was in.

Mollie never let anyone pick her up, not until the very end when she was too tired and weak to protest. She did appreciate back rubs, head scritches and an occasional tussle with a proffered feather, although she usually preferred to play with her cat toys alone at night. As she grew older, she became somewhat more solicitous of human companionship; around 7:00 each evening she'd stroll into the living room, take her place in our recliner and sit listening to our conversation. At some point she'd usually jump onto one sofa, then the other, and accept brief pettings, never staying for long. She'd occasionally also come out to visit during the day, perhaps snoozing for a bit on a sofa back until she'd suddenly sit upright, look around and scamper off the furniture, down the hallway back to her room. She also became more vocal in her later years, chirping pleasantly in acknowledgement of "Hello, Mollie,"  but loudly scolding if we were too with her morning meal or tardy changing her litter box.

Mollie was a hunter extraordinaire -- never birds, always rodents. Every day she'd patrol the perimeter of our large yard, occasionally disppearing into the bordering ferns to sit and wait. At night she kept watch in our garage. She was proud of her work, and always a bit peeved when humans intervened on behalf of her prey. Whenever we went on vacation, even with a cat-sitter visiting her daily with meals and treats, Mollie would double-down on her mousing -- I think her attitude was, "I'm not sure if they're coming back, and I don't trust this other one, so I guess I'd better start provisioning now" -- so  much so that we quickly learned to do a thorough sweep of the house upon our return in order to avoid festering musine unpleasantness in some forgotten corner.

Mollie's relationship with our dogs over the years was mostly benign; think elderly maiden aunt forced to live in a household with boisterous, dirt-attracting children and you'll get some idea of her attitude toward most of our canine friends. Mollie seemed to have a special bond with my little Cody, when we moved in; maybe because he was almost as small as she was; I'd often catch them touching noses or even sleeping next to each other. Chica adored Mollie in a goofy puppy way; she got more than her share of thwacks on the nose for her overenthusiasm, but they still liked each other about as much as a cat and a dog can be expected to get along; sometimes, if Chica had a sleepover at one of her dog-friends' houses and Mollie was at home alone with us, she'd wander the house mewing, apparently trying to figure out where Chica was.

In the last few months Mollie seemed to be in good health but was sleeping more and more; then she developed a cough, stopped eating and started losing weight. One evening she tried to play-run the way she often did through our living room after her self-allotted family time, arching her back and skipping off to her room; this night, though, she kept listing to one side, almost falling over, and her lack of coordination seemed to surprise and distress her as much as it did us. That's when we decided, tears in our eyes, that it was time to let her go peacefully.

Mollie's death was hard for all of us. Even though she was an old lady cat who'd outlived most of her peers, it seemed so strange that she was no longer in our home. I kept expecting to see her in her room, curled up on her chair or keeping watch out the window from her favorite perch on a nearby table. Fellow Traveler felt the loss of one of the last real connections to her life in Maine. And Chica was sad; she had seemed to sense something final about Mollie's illness, and she didn't exhibit the sort of behaviors one might expect of a fellow pet, like searching for Mollie through the house, but she became very quiet and clingy for the first few weeks. And since then she's developed some odd only-dog obsessions she's never had before, like chasing our resident squirrels away from our bird feeders and standing guard, sometimes for hours under the tree. It's as if, without Mollie, she doesn't know what to do with her time and attention. For a quiet little cat who lived much of her life out of our sight, Mollie made such an impression on us, and left such a void in our lives.

But...that's not the end of our cat story. Days after our mournful resolution to not replace Mollie, one of FT's high school friends, someone we regularly keep in contact with, e-mailed us with a dilemma: She has two cats she adores, who are bonded to one another and who've been in her household for several years; but she's recently gotten engaged, and her fiance' doesn't like cats and is insisting that she find a new home for them. Would we be able to adopt them? FT looked at me; I looked at her; we knew what we had to do.

So by this time tomorrow we will be cat-keepers again. Our new cats' names are Dash and Pumpkin. We have so far been very low-key about all of this with Chica, and have decided to approach this new chapter in the family story with some affected wide-eyed surprise and confusion, a situation needing her assistance as pack lieutenant: "My goodness, Chica -- that lady left these two kitties at our house! What are we going to do? You'll have to help us take care of them!"

I'll let you know how that works.

Posted by LutheranChik at 12:29 PM

Hugs to you. I'm sorry about Molly, but so glad she had a good life with people who cared so much for her. I know too many people for whom a pet is a fun distraction for a while, but then lose interest.

Best wishes with the new kitties! Hard for me to imagine a fiance insisting on that - so best wishes to your friend and her marriage, too!

My hubby wasn't a cat fan when we married, but they have grown on him. :)

oh, what a beautiful story of Mollie. She will be missed. Though I do look forward to hearing about the adventures of Dash and Pumpkin. I hope the acclimation goes well!