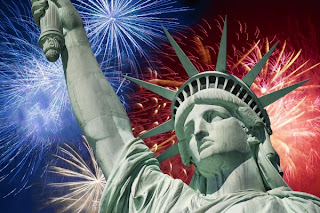 Today at Casa Elenas we've been recovering from our annual family vacation up north -- not because it was bad, mind you; it was wonderful -- but a week of pretty nonstop sightseeing with four other adults and a precocious three-year-old can be fairly exhausting. My schedule today included watering and fertilizing my container plants, making dinner, and...well...that was it. Oh -- and writing. Which is why I'm here.

How does one typically celebrate your native /adopted land's Big National Holiday?
Here in the Upper Midwest the Fourth of July typically marks the peak of  tourist season. The Founding Fathers wanted citizens to celebrate the birthday of the Republic with great public hoopla, and in most of small-town America that takes the form of community parades and fireworks. Here in the northern vacation lands municipalities aren't the only entities setting off fireworks; we have some pretty impressive displays over our local lakes courtesy of lakeside homeowners with the money and courage (or foolhardiness, depending on your perspective) to create their own elaborate shows. One of my former neighbors, on a nearby lake, spent a couple thousand dollars each year on fireworks for his annual Fourth of July party...as Fellow Traveler likes to say, God bless America.2. How do you personally celebrate the holiday described in #1? Any unusual twists on the typical celebration? Is it something you enjoy or endure?
We are not parade people. We are not fireworks people. We are not drunken party people. So our Fourth of Julys are usually spent enjoying picnic foods (indoors or out), avoiding local traffic gridlock during our town's festivities and comforting our pets during the noisier parts. While I don't mind fireworks per se,, they don't thrill me nearly as much as they did when I was a child -- and I hate M-80's; hate them with a white-hot passion.  I don't understand them, the way that our dog doesn't understand them. And as far as the day itself, my ongoing  lover's quarrel with my country makes me uncomfortable with a lot of Independence Day jingoism, as well as the ignorance many revelers have of their own nation's history and governmental workings. 3. What does the word "independence" mean to you, whether in a political or personal mood? How has that understanding changed throughout your life?
To me the independence I value includes not only independence from oppressive institutions, but also independence in terms of disengaging from popular culture; from expectations about what someone of my sociodemographic segment should think or do or be. The other day I thought about our household spending, and it's funny how atypical it is in terms of the things we value, the things we consume. It's also very freeing. And I love being a cipher, a puzzlement, to others who assume too much about me because of my age or location or anything else.
4. When did you first feel that you, personally, had gained independence? Was there a 'rite of passage' you would like to share?
To tell you the honest truth, I never felt totally independent until after my parents had both died. I think this might be the one disadvantage of being an only child: Even after you "launch" physically and professionally, it's hard to feel separate from your parents, especially when they're emotionally needy and constantly summoning you back home, psychologically if not physically as well. And because I felt compelled to hide my orientation from them, I also put my personal life on hold for many years. It was a sad, lonely moment when I first realized, "You're an orphan now" -- but in the scheme of things, that loss liberated me. 5. Tell us about your favorite "indie" film, music label, book store...
I'm not even sure what counts as "indie," so I'm taking a stab in the dark here, but one non-blockbuster I've always loved is "Cold Comfort Farm," a quirkily charming English comedy about a city girl, down on her luck but determinedly plucky, who winds up living with her poor, eccentric country cousins in Sussex, whose fish-out-of-water presence in their midst winds up changing their lives in positive ways. Music label? Again, I'm not sure what is "indie" and what isn't these days. At our house we enjoy singer Catie Curtis, who has her own record label; that's pretty independent, right? As far as independent bookstores...Leelanau Books, in Leland, Michigan, is one of my favorite mom-and-pop bookstores; especially nice if you're looking for Michigan authors.Bonus Question: Is there a time you remember going "against the tide" of advice or precedent, or in some other way? Or perhaps a time you wish you had done so? Share it here!
I majored in advertising in college because it seemed to be a good solution for studying the liberal arts while convincing my anxious blue-collar parents that I was getting a "practical" education. From the git-go I suffered a feeling in my gut (sometimes literally) that this was a big mistake...but after investing a couple of years in the curriculum I felt too afraid and trapped to change my major. I think this is one of the greater regrets of my life, and a case where I wish the promptings of my inner compass had overcome my sense of filial duty and guilt about accepting my parents' money to help pay for my education. On the other hand, had I not set out on the path I chose, I wouldn't be where I am today, in the life I have today, with the family I have today.

Posted by LutheranChik at 8:33 PM