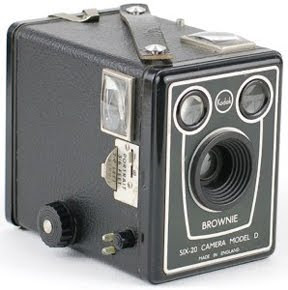 This week's Friday Five is about memories. In honor of that theme, I'm illustrating my post with a photo of a Brownie camera, one of the memories of my childhood. My parents, who were not keen on picture-taking -- too expensive -- kept the Brownie in their bedroom, in the drawer of the headboard, next to my mom's jewelry box, and only brought it out for holidays and other special events.  Closing my eyes now, I can even smell the musty, leathery smell of the camera. But I digress.

A treasured memory from childhood: Going to the grain elevator with my dad in the summertime, and getting a quarter to put in a rusty, battered old Coca-Cola machine that sat in a dusty corner. The elevator smelled of grain...molasses...mineral blocks. Sparrows chirped from the rafters. I would buy a bottle of Coca-Cola, and split it with my dad. It's never tasted the same since I was a little kid.


A teenage memory: Another farm-related memory: Making hay. It was a great summer job. I drove tractor while my dad stacked the hay bales. My father was very exacting about baling and wouldn't tolerate lost hay; I had to practice to aim the baler right down the middle of the windrows, and turn corners so that not one strand of loose hay escaped the baler -- or else I'd have to go back, after the field was baled, and pick up all the missed corners.  Once I was sufficiently schooled in that task, though, I was happy to drive around and around, thinking my own thoughts, composing Great American Novels, observing the wildlife around me in the fields and surrounding pastures. I really think every teenager should have a job that involves some sort of manual proficiency, and a tangible work product.

A young adult memory: Other than my university years, I don't have a lot of happy young adult memories. After I graduated from college I couldn't find a job in my major, or indeed any kind of college-graduate-worthy job, and wound up working in a bookstore. If you have to slum, that's about the best slumming job there is. But I recall walking home from the food coop one day, and being overtaken by a wave of despair and hopelessness. I will never find a real job, I remember thinking. I am going to become one of those burned-out college town lifers who haunt the sidewalks and cafes decades after their university careers. It actually took me two more years to escape that fate.

A memory from this summer: We just made a good memory, this very weekend, by taking a spontaneous two-day stealth vaycay up to Suttons Bay for the Suttons Bay Art Fair. (This pleasant surprise was made possible by the Saginaw Chippewa tribe -- ironic considering my profound lack of interest in gambling. Earlier in the week FT had been called away from a stained glass project for The Kids by her sister, whose car had broken down -- in Frankenmuth, two hours away. No one else was available to help. FT reluctantly made the trip downstate, got her sister back home, headed north -- and stopped en route to discharge some frustration at a regional casino. Ten minutes into her grumpy arrival she hit a jackpot at a nickel machine. When she called me, she was so excited that she could barely make sense. FT's 10-minute flirtation with Lady Luck pretty much paid for our excursion. I'm not complaining.) We had a romantic evening meal at North Centennial Inn, a restored inn with a lovely wrap-around porch overlooking a shady perennial garden. The food was wonderful; the service was professional and discreet; the atmosphere was evocative of historic "lake country." It was a beautiful way to spend a cool summer evening.

A memory you hope to have. I would like to be able to, at the end of my days, genuinely say, Thank you for the gift of my life.

Bonus: And on that note, here's Dave Matthews singing a favorite Beatles song of mine:

Posted by LutheranChik at 5:57 PM

The Coke doesn't taste the same because instead of real sugar now you get corn syrup in it. I bought a couple of cases of Dr. Pepper in retro design cans that's made with real sugar. Yum.

Talking about Beatles songs. My kids (girl 17, girl 15, boy 12, and boy 8) went to see Paul McCartney last night with my sister-in-law (32) and mother-in-law (70-something). They called this morning to say it was absolutely fantastic. I read the review of the concert and it received raves. The review said he plays and sings and has the stamina of someone a quarter of his 68 years.

We had a change of plans. We're not doing the Henry Ford Museum, Frankenmuth vacay next week. Can't afford it right now.

Tom, you won't find a lot of "echte" German food in Frankenmuth, unfortunately -- but the Frankenmuth Brewery, a brewpub right downtown, has great beer and decent pub grub. Our Christmas-crazy kids have semi-religious experiences at Bronner's...us not so much; but it's actually a good place to find Advent supplies.

I had one of those cameras. It had been my mom's when she was young. It started my strong love of taking pictures everywhere I go.

We just got back from Eastern Wis, visiting mom and 6 other relatives. We took 2 days to get home, so, for a change, we could take a scenic route, visit an art gallery, visit two places along the shore of Lake Superior we've never been, etc. That sure beats the 480 mile, drive in one day trip we usually take.