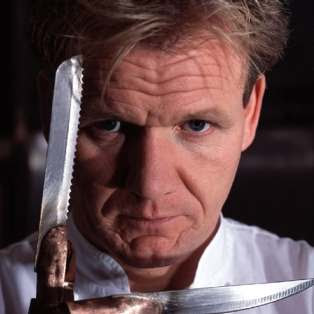 We've gotten hooked on BBC America's version of Ramsay's Kitchen Nightmares, in which, each episode, Gordon lands on the doorstep of a moribund eating establishment and proceeds to run the staff through a kind of restaurant bootcamp for a week. He departs for a month, then returns to see if the owners and staff have taken his advice to heart.

It's formula television to be sure, staged and edited for maximum entertainment effect. But despite this, we find Ramsay to be sincerely passionate about food; about the hospitality business; about the importance of honoring local food traditions and supporting local farmers and food artisans; about mentoring people, especially young people, who have the requisite talent and motivation. And he truly seems to want to help the hapless restauranteurs he encounters who have, in his words, gotten themselves in the shit. Yes, he's quite an exciteable fellow; but as my mother used to say, "I'm yelling because I care."

I told Fellow Traveler that I heart Gordon because I suspect I have an inner Gordon of my own who yearns every so often to be let loose on the world. FT, who after her time in the military and at the university spent many years managing food service in places ranging from airline catering companies to urban hospitals to care facilities for aging nuns, has a professional's insight into many of the issues that Gordon tackles on his shows, so for her they're like Old Home Week without the responsibility and stress. (And she freely admits to getting her Gordon on, at least in terms of intimidation if not vocabulary, during her career; her children joke that in a just world she'll wind up in a nursing home whose kitchen staff consists of her fired employees.)

I sometimes wonder what would happen if Gordon would apply to churches the same kind of tough love he applies to failing restaurants. Especially in the climate of the ELCA, where official pronouncements all seem to float amid a word cloud of fuzzy therapy-speak, and where intracongregational relations so often involve triangulation, obfuscation and innuendo ("Pastor, some people are saying..."), what would it be like to have Gordon Ramsay entering into the life of a congregation for a week and goading people into brutally honest communication and active engagement? Can you imagine him, say, critiquing the average church council meeting?

"What the b***** hell? You've gone on for 15 minutes now, and you haven't actually said a b***** thing! Christ Almighty, grow a pair of f****** bollocks and say what you mean!...'Somebody' doesn't like the changes to the Sunday School program? Somebody? Oh, for Christ's sake!  It's b***** well you, madam. You are the somebody. So stop the f****** whingeing and own your own statements! What the hell! You're all f****** adults in a business meeting, not toddlers in a creche, pissing yourselves in your nappies! Grow up! Let's start all over again..."

Or imagine Gordon critiquing an ushering staff on a Sunday morning:

"There's a visitor looking lost -- where the hell are you? Over here counting bulletins? What the f***?  What does an usher do? What does an usher f****** do? You greet people as they come in! You help them find a seat! You make them feel welcome!  You don't stand mooning about here in the narthex, you berk, poking through the b***** bulletins! Shit!  Useless...absolutely useless. Here, let me show you how it's done..."

"Turn off that b***** cellular before I take it out and stamp it into f****** bits! What the hell! This is a confirmation class, not a f****** pyjama party! Did you even hear what the pastor just told you about the Apostles' Creed? Did you? Did you? F****** unbelieveable. I'd tell you to go off and join the b***** heathen, but you're there already because you're about as f****** ignorant about Christianity. Jesus. Pay attention. All right then. Here's what we're going to do..."

It's fun to imagine, anyway. And I notice that, in his show, Gordon always pairs his Law with Gospel -- after getting his pupils' attention by verbally reaming new orifices into them, he offers to teach them another way; and models it, and sticks with them until they seem to be getting the hang of it.

In an era where we're all so afraid to offend, maybe it's just refreshing to occasionally come upon a character willing to sin boldly in service to helping other people be who they can be...who acts as a therapeutic rubber band snapped on the wrist of our psyches, making us sit up and take notice.

He yells because he cares.
Posted by LutheranChik at 7:53 AM

i love it! I don't know the guy but we might need the shake up...although immediately at our church i see them telling him straight to his face that he needs to wash his language.

This is awesome and hilarious. And true. I have never watched him, but I love your observation that he pairs law and gospel.

me too! hooked on the ramsey... *sigh* and i've thought this too re: the elca... someone who will for the love of God SPEAK up is sooo necessary. bring it gordon. bring. it.

LC, if you will do that for my congregation, I will do it for yours--but then again we probably wouldn't have congregations after we finished it.!

I don't watch near enough Brit TV. It took me two hours (while doing something else, of course) to decode b*****

I'm no great fan of Gordon Ramsey - we have quieter, nicer good cooks on British TV, but I just love your version of Gordon steaming into church duties!! Oh how we could do with that here!

LOVE THIS! Blue Eyes and I are great fans of KN.

Did GR have a previous life as a nun? Because I think he actually did teach my (RC) congregation class.

LOL!! Am considering sharing this with my pastor.

Oh my God, you are awesome beyond words. Coudn't have nailed the Ramsey script more thoroughly {not worthy}

wondrousness, sister. What a great great take on our churches and our entertainment...