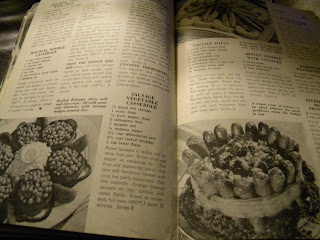 I was in search of a recipe today, a recipe for applesauce pie -- my mom never made this, but we have some home-canned applesauce that I think would be mighty tasty in a pie -- so I went to my mother's battered (mostly battered by me, as a small child) "green cookbook."

The cover and first few pages have been missing for decades, so I can't tell you the title. I know that my mom got it as a wedding shower present back at the beginning of the 50's; the artwork and photos suggest that it was published a decade earlier. My mother seldom used this book -- she told me the recipes were too fussy and never worked out for her -- but she kept it all her life, with all her other recipes. And it was a big part of my childhood; I treated it first as an interesting picture book, and then later as an inspiration for my budding culinary impulses.

I never did find the applesauce pie recipe I was looking for, which involves eggs and creates a kind of appley custard. Instead, this book suggested simply pouring applesauce into a graham cracker crust, chilling well and plopping some whipped cream on top -- tah-dah: pie.

You've got to love the thrifty, silk-purse-out-of-sow's-ear ethic of the green cookbook. While it has its share of early 20th-century fancy fare like baked Alaska and intricate party canapes, it also contains lots of recipes using stale bread; odds and ends of leftover stews and roasts; wildsourced fruit and game; and what cooks delicately refer to as "variety meats." (If tripe, sweetbreads and hearts ever make a comeback, our household is hooked up with recipes, I'm telling you.)  Need a cake but only have one egg? Bake a one-egg cake. Can't afford a crown roast for a special dinner? Make a sausage "crown" filled with potato salad.  Did the milk turn sour? Make pancakes. Leaf lettuce a bit past its prime? Toss it with a hot bacon vinaigrette.

This shames me a little, as I think about our own penchant for shelling out serious money for the esoteric ingredients of one experimental recipe even as we regularly throw out literal buckets of leftovers,odd bits and Good Ideas At the Time.

Using what you have instead of wanting what you don't have -- not a bad Lenten discipline.
Posted by LutheranChik at 5:42 PM

I'm sure my mom grew up with the non-artistic version of this type of cookbook.

Note the photo of peas in bologna cups! "Been there"!