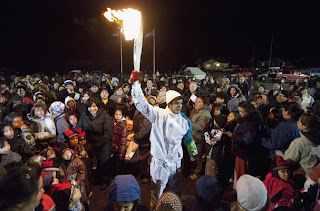 My RevGalBlogPals Friday Five is rather late today because I'm having an issue with cutting-and-pasting, thanks to my wonky touchpad. (The victim, I fear, of too much mah-jong and Scrabble.) But I am slowly piecing together this week's questions.

1) Which of the Winter Olympic sports is your favorite to watch?
I really enjoy the freestyle skiing, downhill slaloms and snowboarding. Women's hockey was great fun this Olympics. And this year we got into curling in a big way. I used to be all about the figure skating, but the intrigues and scandals and vagaries of the scoring system have managed to dampen my enthusiasm for those competitions.


2) Some of the uniforms have attracted attention this year, such as the US Snowboarders' pseudo-flannel shirts and the Norwegian Curling team's -- ahem -- pants. Who do you think had the best-looking uniforms?
Hmmm...none of their actual uniforms made much of an impression on me. I did think we Yanks were stylin' and profilin' in our Ralph Lauren duds during the Opening Ceremonies.

3) And Curling. Really? What's up with that?
Oh, now we were quite taken with the curling (which we watched on the USA Network while NBC was running tape-delayed coverage). We like the combination of kinetic skill and strategizing. It's also a sport that -- well, that un-buff, un-glamorous, un-young people seem to have a chance to shine in.  And, yes, the brushes are kind of goofy -- I think the Swiffer people might be able to spoof them in their ad campaign about obsolete household cleaning devices -- but they do seem to work, don't they?

4) Define Nordic Combined. Don't look it up. Take a guess if you must.
This non-jock might know the answer without looking it up. Isn't it cross-country skiing combined with ski jumping? But not with the shooting, which would be the biathalon. Or something like that. Actually at our house "Nordic combined" would look more like smorgasbord washed down with Carlsberg.

5. If you could be a Winter Olympics Champion just by wishing for it, which sport would you choose for winning your Gold Medal?
Definitely Couch Commentary. I enjoy it and I'm pretty good at it, if I do say so myself.

Posted by LutheranChik at 4:25 PM

I imagine your commentary is quite medal-worthy. :-)