She Was a Good Girl 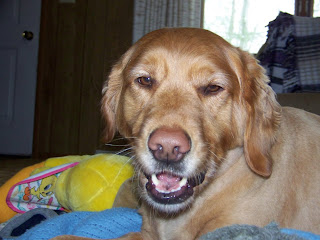 I am crying as I'm typing this.

Cassie -- also known at our house as Cassie May, Casserole, Princess Cassolatta and numerous other affectionate monikers befitting her personality -- traveled over the Rainbow Bridge this morning.

Cassie had been acting rather quiet and sluggish earlier in the week, and yesterday she began vomiting as well. We chalked it up to some ordinary illness, although we made an appointment with her veterinarian for today; and yesterday evening she seemed a little better. We took her and Gertie to the local cemetery -- one of their favorite places to run -- for a romp, then to McDonald's for ice cream, then the trip home with both dogs' heads out the windows. Cassie seemed on the way to normal.

But she wasn't. She began vomiting again, over and over. She moved restlessly from the bedroom to the living room, where Fellow Traveler was keeping vigil with her. She couldn't seem to sleep. She came to me around 4:00 a.m. for a little ritual we call "Auh-wuh love" where she licks my face and I give her hugs and tickles.

She was finally resting quietly on the sofa when I went to work this morning, but I had a sense of forboding.

I'd been at work for maybe an hour when I got a phone call from Fellow Traveler: The vet had examined Cassie and concluded that her kidneys were failing, that she was in pain that would only get worse, and that putting her to sleep today was the option that would let her pass with the least discomfort. Our vet, who's a traveling DVM, does not euthanize animals herself for some medical reason that escapes me now, but she maintains a relationship with the local animal control center, which has a quiet, clean room for putting pets down. That's where we took Katie, Cassie's older dog sister, when she developed a brain tumor and was nearing the end.

So I rushed home so we could all go to Animal Control together. The normally puppyish Gertie had been relatively quiet for the last day or so, staying close by her dog sister, and in the Jeep she looked confused and a little frightened. Cassie had jumped into the vehicle willingly but with noticeable difficulty; she wanted the window down, so we let her hang her head outside one more time. When we got there Cassie jumped into the front seat, into my lap, as Fellow Traveler got out, so I hugged her and told her she was a good dog and that we loved her. Then I stayed with Gertie in the Jeep while Fellow Traveler took Cassie inside. The doctor had called Animal Control to let them know we were coming, and to instruct them to euthanize Cassie as soon as possible, because she was a sensitive dog and we didn't want her to become afraid, waiting.

We had a quiet ride home. We tried joking a little about Cassie -- about all the times we'd threatened to take her to Animal Control for various misbehaviors. We got some lunch to take home; got the mail. Gertie sat on my lap.

After a fast, fairly silent meal we both began quietly falling apart. We turned on Sirius Coffeehouse for some music: Ben Folds was singing a cover of "Golden Slumbers," which elicited a new round of tears for me. Fellow Traveler finally fell asleep, exhausted, with Gertie curled around her feet.

Cassie could be all dog -- we called her our tomboy, because if any of our furkids were to get muddy, stinky or otherwise in trouble outdoors, she'd be the one. On the other hand, she could be a diva with the personality of a hormonal 14-year-old. Or she could be Snoopy as Joe Cool or the Flying Ace, staring off into space for hours on end engrossed in some canine fantasy that we could only imagine. After some initial disdain for our newest family member, she adopted Gertie as an alternately amusing and irritating baby sister.

Cassie liked to eat. She liked to sleep. She liked toys with squeakers, which she inevitably removed and treated as trophies. She loved swimming and running behind the Jeep on local two-tracks. She lived to chase squirrels. She loved the neighborhood deer, as long as they stayed on the other side of our property. When she was happy, she'd make happy piggy grunts. She'd greet us in the morning by grunting and snorting and waving selected objects -- shoes, underwear, socks, paper -- in our faces. (Once, when Fellow Traveler and I were still in the getting-to-know-you stage, Cassie pulled her own puppy photo album out from under the end table and brought it to me. Fellow Traveler says she was trying to seal the deal.) She could be incredibly obstinate, and snotty, and distant. She could also be sweet and affectionate, eager for kisses and cuddles.

She was a good girl. We will miss her so much.

Here's the song we heard today, coming back without her:

Golden slumbers fill your eyes
Smiles awake you when you rise
Sleep pretty darling do not cry
And I will sing a lullabye
Posted by LutheranChik at 9:52 AM

I'm so sorry to hear about her passing. She sounds like an awesome dog.

I grieve with you and fellow traveler over your loss. May the good memories blunt the edge of the emotional pain.

*ehugs* and prayers for consolation.

I am so very, very sorry to hear of your loss.

When I read your post, I immediately remembered (and had to go find) a post from last summer, where you described
Cassie helping Gertie to cross a stream, when Gertie was afraid. You said that it made you think of how Luther described Christ as "Elder Brother," and the "One Who Goes Ahead of Us and Shows Us the Way."

This may sound bizarre, but that little story helped me -- a lot. The religious tradition I was raised in often focused on Jesus as judge, even to the extent where one got the impression that Jesus was busy looking for reasons to condemn us. In the months since I read that post, I've often thought of Cassie showing Gertie the way, and what a lovely analogy that was. Please accept my condolences on the loss of such a great dog.

So sorry about the loss of your beloved companion.

We're walking the same path this week, as you know, and hold you in our hearts. Godspeed, Cassie.

LC, I'm weeping now with you in your loss. Our four-legged companions are such blessings, and they saturate us with so much love. I pray that you are comforted by your memories, and the love that continues to surround you.

I am so sorry for your loss. Thank you for sharing her with us in these memories.

So sorry for your loss. What a wonderful companion to have had in your life. ((((LC and FT))))

I am so very sorry. She had a beautiful face...

I am so very, very sorry. She will be missed.

LC, I'm so sorry to hear about your loss! Doggies are such good friends. She was beautiful. Peace.

I am so sorry! Dear Cassie.
Love and hugs to both of you, and Gertie too.

I'm sorry for your loss, too. It sounds as though you both gave her a good life in return for all she gave you.

I am so sorry. Cassie was indeed a good girl, and I know you miss her.

Princess of Everything (and then some) said...

I am so very sorry for the loss that your family is going through. She sounded like she really did love her family and that she was really loved in return.

LC, my heart is breaking for you, FT and Gertie. Cassie was a good girl and you have been changed for good because you shared your lives with her.
peace and love to you all+

your up north compatriot, revhoney

I'm so very sorry. I'm speechless and crying and wishing you peace. She was a beautiful dog.

I'm so sorry. May your many sweet memories of Cassie lift you in this sea of grief.

Oh no. I am so sorry, LC & FT. What a week. Maisie's ending was just like Cassie's and the suddenness was hard to deal with. Much love to you both & thank you for helping us get to know the lovely Cassie a little here.

Such a touching tribute to her. She blessed both of you and you here.

I am so sorry. She was a good, good girl.

Crying wiht you today. Prayers for all of you.

oh damn... i pray the sorrow lessens and that the two of you take good care of one another until it does.

I'm so sorry about beautiful Cassie. There's a brighter star in the sky now. This will be a hard time for you & FT; Gertie, too. Know I am thinking about you and praying for comfort. How fitting to hear "Golden Slumbers."

I'm sorry for your loss. (((LC and FT, and Gertie, too))) It's so hard to lose family members regardless of their form.

I am very sorry.

Prayers from me and my family.

Off to hug the cats now.

I'm so sorry. On Friday I posted about the loss of our own dog named Cassie. It was a long time ago, but I still miss her. Virtual hugs, and real sympathy and prayers, for you and Fellow Traveller.

Sorry for your loss. Prayers and hugs to all of you .. and like Mark, I'm ff to hug my cats now.

Oh Lord, Sweetie, I am so sorry for your loss.

Blessings on you and your family through this time.

Very sorry to hear about the death in your family.

I'm crying for your loss. You'll all be in my thoughts and prayers.

Cassie sounds like a wonderful dog. And she passed knowing she was loved.

I'm so sorry. Prayers for all of you.

So sorry. Prayers and love to you all.

This post is beautiful. Your pain sucks. I am so sorry. What a great dog!

Praying ans sending virtual hugs. Cassie was lovin and loved, one of the best of God's creations.

Oh, I'm so sorry. How difficult.

OH, Lchick, so sorry about Cassie.
Our beloved Ben crossed Rainbow Bridge, Dec. 13th. It is so hard to lose our furry companions.
Grieve well and be kind to yourself.
Sorry it took me so long to find out. My RGBP's page is corrupt and am having to find alternative ways to access the community and everyone. It sure makes it tough.
Thoughts and prayers are with you both.