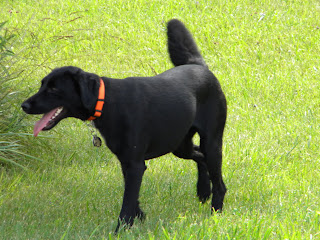 It happened in a blink of an eye.

We were in the Jeep, Gertie and I, driving home from a trip running errands. We had found ourselves behind an Amish cart at a corner, and I patiently waited there for the driver to pull onto the highway and gain some momentum so we weren't tailgating him. Gertie, who loved to bark at horses, was on full alert in the back seat.

"Gert -- now, behave yourself," I cautioned her as I pulled onto the pavement and began to pass the cart driver, who'd gone off onto the shoulder to give me room.

What happened next was -- well, I don't know. I heard barking, and clinking, and then when I looked back to shush Gertie, there was no dog in the back seat. I looked in the rearview mirror and saw a dark shape limping into a bush in someone's lawn maybe 50 feet away, and the Amish driver stopped on the shoulder, staring in alarm.

Gertie had never, in her years with us, expressed any interest in jumping out of the window. But apparently this is what she did.

I stopped the Jeep, ran back toward the yard and scooped up Gertie in my arms; she was quiet -- too quiet -- and panting.

"Don't be sorry," he said. "It was my horse she didn't like. I hope she'll be okay. It looks like she might have broken her leg."

We were only about  mile or so from home. I don't remember driving there, but I did. Fellow Traveler was in the garage, cleaning. She smiled when she saw me -- until she saw the look on my face.

"We need to go to the vet's right now," I burst out. "Something's happened to Gertie. She jumped out of the car."

Up to this point I'd been running on adrenalin, my mind a blank, but at that point I broke down.

Not Gertie. Not our baby. Not "our" dog.

FT quickly examined Gertie, who winced and whined a little, but mostly just lay there on the back seat. She'd begun to bleed.

FT came in while I was still wringing out the towel. "I don't want you to go with me," she said. "There's probably going to be a lot of pain during the examination. You've seen and done enough right now."

I sat in the living room and listened to the Jeep speed down the driveway and to the next town over, where the closest veterinary clinic is. Across from me Mollie the cat slept, blissfully unaware of the drama playing out in our home. I started to sob.

A very short time later, I got a phone call. "We are at the vet's," FT murmured softly. "We're going to have to put Gertie to sleep. There's too much internal injury for her to get better." This veterinarian's office euthanizes all its animals at the end of the business day, so FT had the veterinarian call our local animal shelter, where we'd taken Katie and Cassie when they were dying, where the staff had been so kind and gentle; and they told FT to bring Gertie right over.

Another half hour passed; and then FT pulled into the driveway.

"I'm so sorry," I sobbed when a red-faced, weeping FT came through the door. "I'm sorry you had to do the hard thing."

She shook her head. "No; you had the hardest part of the day." 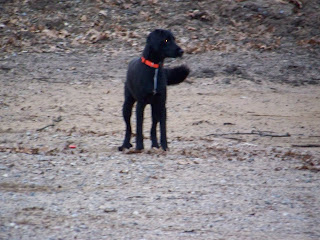 And that's how it's been around here. We cry; we hold one another; we reminisce; we try to distract ourselves; we move to opposite chairs and just sit quietly with our own grief.

This morning we began picking up after Gertie for the last time: collecting the dog biscuits scattered throughout the house, bagging up her battered assortment of toys, cleaning her pawprints off the French doors. We're also trying to somehow convey to Mollie the cat, who keeps sniffing and staring out the windows and looking at us quizzically, that her best pal is not coming back.

I know that people who aren't pet people don't get this; don't get how we, whose circle of friends includes people fighting terrible cancers and other mind-numbing calamities, can be so seemingly dispassionate about those things but so uncontrollably distraught over the loss of a dog. And frankly, if animals aren't your thing, I'm not even going to bother to explain.

This ain't my first rodeo when it comes to the death of an animal. Growing up on a farm, death is a  constant presence among the livestock. And I've lived through my share of dead dogs -- dogs who darted in front of cars in a final, fatal "ooh, shiny" moment; dogs in extremis whom my rifle-bearing great-uncle would take "out back" at the behest of my dad, never to be seen again; graying, cataract-and-arthritis-ridden dogs who simply gave up the ghost in their sleep after a long, full life.  Right now I can't read any treacly homages to pets crossing the Rainbow Bridge...my belief system gives me no comfort, frankly, damn it...I just brood and weep and try to stop the images of those horrific moments and the self-punishing "What ifs" from circling around and around my head. 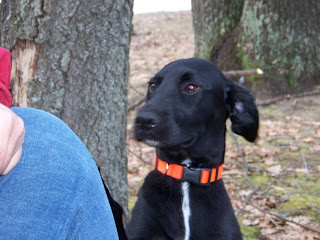 Gertie was the Best Dog Ever. That's what we would tell her every day, and it's what I'm saying now. She didn't deserve the way she entered into this world, and she didn't deserve the way she exited it. But in the time in between she added so much joy and humor and affection and companionship to our lives. Maybe that doesn't count anywhere but in our hearts and memories. But it counts to me. Gertie left the world, and our lives, a far better place for her having lived in it.
Rest in peace, good friend.
Posted by LutheranChik at 8:55 AM

I'm so sorry to hear about Gertie :-(

So sorry to hear about your loss.
Bill in St. Louis

Offering sympathy and condolences. You have allowed me much vicarious joy in your writing about Gertie and this piece of writing is a beautiful tribute to her and to the love humans and animals can share.

I'm more sorry than I can say. Linus & Lucy got an extra treat last night. You guys are in our prayers!

A wonderful dog. I always have enjoyed reading about her and seeing your pictures.

Praying for y'all last night, this morning, right now.

I'm so sorry for you, FT, Mollie and Gertie. We're a dog-loving family and, sadly, there's always too soon and then TOO soon. Gertie is definitely in the latter category. We'll be praying for you and sending tail wags your way.

Oh gosh ... I am literally crying, dripping tears all over my keyboard. Sigh .. I know all too well what you're going thru (my most recently departed dog ... my heart- and soul-mate .... holds a permanent spot as my desktop wallpaper. And he died 4 years ago.)

Crying in sympathy for you. I will be praying for you guys to find some comfort and peace.

In the beginning when God's Spirit was moving across the face of the waters and then when God moved to create, God created dogs. And then God called them "good." In the midst of your grief, I don't seek to give you "easy answers," but I hope to give you a bit of hope when I say that the God who comes to us in Jesus Christ has come for all Creation, Gertie included. Peace and prayers to you.

Tears too. I understand.

No amount of experience makes losing a dog any easier. A friend.

I do believe the kingdom of God, a kingdom that reflects the good on earth will be teeming with dogs. (Let it be on earth as it is in heaven...)

Gertie would be a great heavenly dog, especially to any dogs that had been abused in this life. She had the sunniest, sweetest personality, and just loved other dogs. The dogs in our parish are going to be as sad as our people! (Because even though Gertie was bashful, she was a constant presence with us...so if E1 or I was working in the church office on a weekday, she'd be there too. And she'd be there every Sunday, waiting in the Jeep and watching everyone. She loved church -- if you said, "Gert -- want to go to church?" her eyes would light up and she'd start barking and wagging her tail.

I am so very sorry...prayers for you and yours.

Oh I am SO sorry...Hugs and love to both of you, and thank you for sharing your delight in Gertie with us along the way.

I admit I'm not an animal person and don't have the experience or understanding of the relationship that people have with their pets. But in your words I can empathize with your pain. I'm very sorry.

When one of my daughters was still quite young, my sister-in-law's dog died (she just got old). My daughter cried and asked if the dog went to heaven when she died. I said that I think heaven is a place where we can be happy, where we can be with the ones we love(d) so I think one day we'd meet Duchess there. I pray that for you and Gertie too.